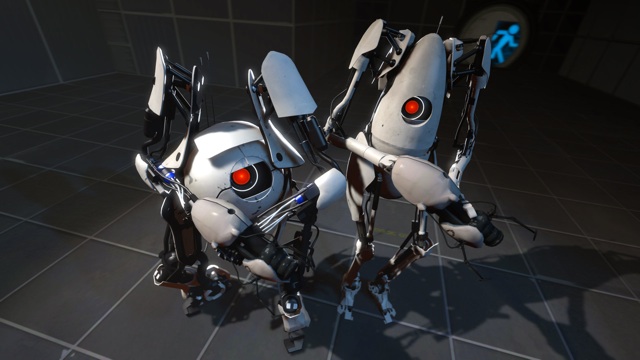 It’s hard to overstate my satisfaction. Portal 2, the long-awaited sequel to Valve’s 2007 first-person puzzler hit, takes everything that was great about the original and supercharges it. With science.

When Portal debuted in the Orange Box package, it seemed little more than an afterthought; a quirky little puzzle game tacked on between Half-Life 2 and Team Fortress 2. But it quickly became the breakout hit of that package, winning fan and critical praise for it’s addictive brainteasers and it’s evil-but-oh-so-fun antagonist, the homicidal and passive-aggressive artificial intelligence GLaDOS. And though the story ended with the player killing the mad machine, I don’t really think it’s a spoiler to tell you that the bitch is back for a rematch.

A lot of time has passed since our hero, the soft-spoken (read: mute) test subject Chell, crawled from the rubble of Aperture Science. Like, a LOT of time. Perhaps centuries. You’re back in the facility somehow, and you’ve been awakened from a very, very extended cryosleep by Wheatley, a concerned and helpful personality core (voiced hilariously by British writer/comedian Stephen Merchant). With his/its help you begin making your way through the still dangerous ruins of the testing chambers trying to make it back to the surface. The early stages of the game reacquaint the player with the game mechanics, bringing back the portal gun, the big shiny red buttons, the Material Emancipation Grids, and (squee) the Weighted Companion Cube. Eventually GLaDOS makes her big return and she begins “testing” you to within an inch of your life.

It has to be said that the puzzle aspects of Portal 2 are rather miraculous. In a game like this the developers have to balance the difficultly of the puzzles with the playability of the story, to say nothing of the patience of the button jockeys playing at home. Here Valve has absolutely nailed it. Each progressive level becomes more and more challenging, but I never once felt so helpless or confused that I grew frustrated. There were definitely challenges, even in the “easier” test chambers, to be sure. And more than once I found myself seemingly stuck. But every time all it took was a few moments to catch my mental breath, a careful look around the environment, and a healthy dose of out-of-the-box thinking, and I always managed to find my way out. It really strokes your ego, feeling like you’re the smartest guy in the world (or at least the room) for working out the Rube Goldbergian steps required to escape some of the tests. And then you’re on to the next life-or-death puzzle and you start to worry about your brainpower again.

It helps that there are new puzzle elements added to this game. In addition to the usual suspects from the original Portal (buttons, lasers, moving walls, moats, turrets), now there are gravity streams, solid-light bridges, and gels that can bounce you or speed you up or… well, you’ll see. All that added to together makes for some spectacularly complex challenges. A handful of tools that allow for staggering diversity of play.

Another thing that I was particularly struck by while playing the single-player mode (oh yeah, there’s a multi-player mode now as well, but we’ll get to that), the environments are highly detailed, but never confusing. By that I mean I’m typically one of those gamers that is easily distracted by the ability to explore every nook and cranny of a gamespace. In Portal 2 you are running through some preposterously huge settings, with countless passageways, catwalks, ledges and platforms to choose from. But I never once felt lost or overwhelmed by choices. Which sounds like the lead-in to a backhanded compliment where I say that the game leads you by the hand from one set piece to another. Not so. There was some kind of programming alchemy at work here, because despite the fact that you are often following a character (Wheatley) who is LITERALLY on a rail, it never feels like a rail game; I never felt like I was forced to follow one simple path and all the details around me were just matte paintings in the background. Now at times that may in fact be exactly what was happening, but not one time did it ever FEEL that way. So kudos to the Valve team for that one.

Lastly, there’s the story. I’m not going to talk about it much because I don’t want to spoil anything. Unlike the original, Portal 2 is at least as much about the story (of the characters, of Aperture Science, of the world they exist in) as it is about solving puzzles. There are twists and turns, shocking revelations, family histories, betrayals, alliances… and an epic, badass final battle and denouement. Seriously, for as smug and clever as I felt thinking my way out of some of the deathtraps earlier in the game, when I figured out what to do in the final moments I almost jumped out of my seat. I may have peed a little bit.

And yes, there’s another song. But do yourself a favor and do NOT listen to it before you play the game. It’s online, but resist. Play through to hear it. Work for it. Earn it. You’ll appreciate it more.

So that’s all just the single-player game. All told it comes in at around 7-9 hours of play. But there IS a multi-player option as I mentioned above. It’s actually just a two-player co-op mode where you play one of two testing robots, ATLAS or P-Body, also being run through the ringer by GLaDOS. For science, naturally. Each ‘bot has its own portal gun, which means in co-op play the puzzles can take advantage of FOUR portals working at once rather than the two that Chell has to work with in the main story. I’d love to tell you how this affects gameplay, how absolutely batshit insane it gets, but I haven’t actually played the co-op yet. I’m not a big fan of online multiplayer stuff. I’m sure I’ll check it out since I’m told it constitutes an entire campaign of its own. But for now I think I’m content to replay the main story from the beginning.

Look at me still talking when there’s science to do. Portal 2 is an improvement in practically every way on a game that was already award winning. The action is bigger, the puzzles are more challenging, the characters and dialogue are funnier. There are new characters introduced that are just as memorable as those from the original. And speaking of original, GLaDOS is even more heartwarmingly sinister and passive-aggressive than ever. This is absolutely required gaming.

Delicious and moist. No lie.