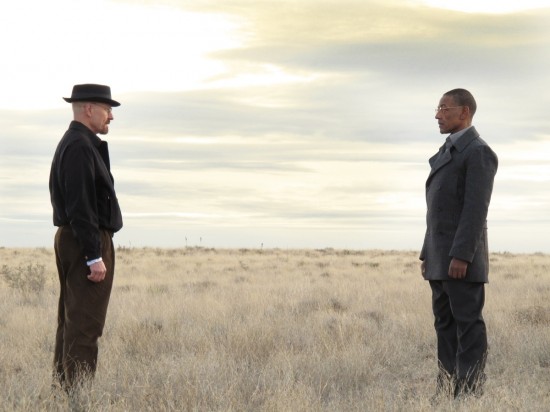 Breaking Bad‘s terrific second season was tightly plotted ahead of time, with ample foreshadowing throughout. For the show’s third season, however, creator Vince Gilligan and his writers turned into expert jazz players, improvising every note, changing rhythm, and exploring all sorts of new grooves. Gilligan and Co. repeatedly force science-teacher-turned-methmaker Walt and his junkie partner Jesse into corners there’s seemingly no way they’ll get out of; and the creative team had no idea if they could either, until they started writing the next episode. An approach like this could easily have been disastrous, but instead makes for one of the all-time great seasons of television. The jagged, frayed chemistry between Bryan Cranston and Aaron Paul makes for the best duo on TV, both giving fierce performances. Stand-out episodes in a stand-out season include “One Minute,” with an intense set piece for the ages; “Fly,” which takes place entirely in the lab, examining Walt and Jesse’s relationship; and “Full Measure,” the epic season finale. Extras include commentaries by Gilligan and the cast; and a number of featurettes. 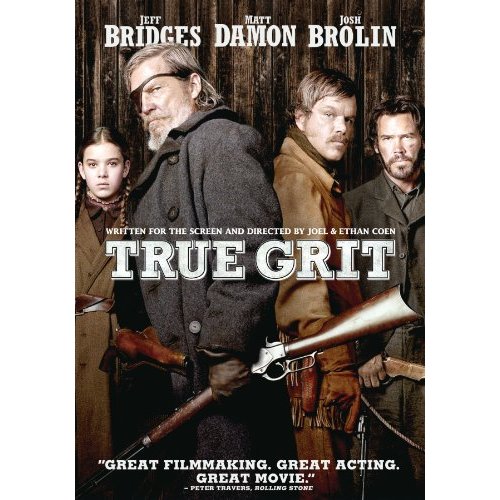 The Coen Brothers take on the Old West with True Grit, previously made into a classic film starring John Wayne. Not having seen the Wayne film nor having read the original Charles Portis novel, I still find the Coens’ True Grit to be a stirring reminder of the classic Western. Jeff Bridges is a mean but noble drunk as Rooster Cogburn, gargling his dialogue–both intelligibly and less so–and Matt Damon is oddly funny as Texas Ranger LaBoeuf (pronounced “La Beef”). But the movie finds its soul within 14-year-old Hailee Steinfeld as Mattie Ross, the resilient young woman looking to avenge her father’s death. Bridges is the showpiece, but the grit is all Steinfeld. The gorgeous cinematography by Roger Deakins, coupled with Carter Burwell’s old-fashioned score, will cause a lump in the throat of anyone who still gets tingles watching horses gallop across sun-drenched vistas. DVD extras include a couple of featurettes, while Blu-ray extras include a couple more, plus a theatrical trailer.

(Originally reviewed by both myself and Paul in “True Swan/Black Grit.”)

Mike Leigh’s look at the lives of an aging couple and their friends over the span of a year, divided into chapters by season, is the rare film that allows us to feel like we are genuinely getting to know the people at its center. By time the credits roll, they feel like family. Jim Broadbent and Ruth Sheen are lovely as the couple,  and so is Oliver Maltman as their son. However, Lesley Manville walks away with the movie as Mary, an alcoholic that Broadbent and Sheen continually, at times reluctantly, take under their wing. Mary is annoyingly chatty and forever stuck at the mental age of a twentysomething; she’s the kind of houseguest who becomes a handful by the end of the night. Along the way, through the sheer force of Manville’s performance, Mary stops being irritating and instead becomes a tragic figure who simply can’t cope with life. In the year the movie shows, things progress about as much as life usually does outside the movies: some things change, while many do not.

(Originally reviewed by me in “Secret Origins.”) 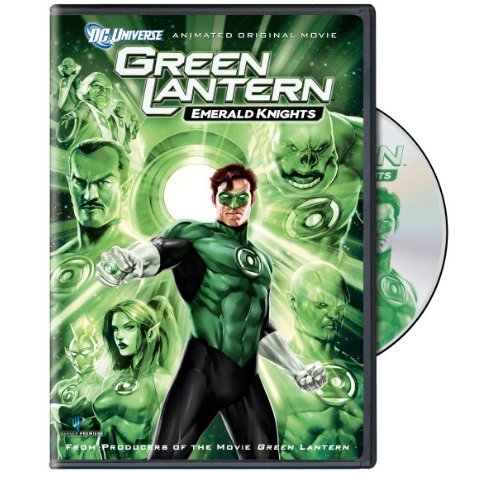 The latest DC Universe Animated Original Movie, Green Lantern: Emerald Knights is an anthology film that finds Hal Jordan (the voice of Nathan Fillion, yay!) preparing new recruit Arisia (Elisabeth Moss, yay!) by relating stories of other Green Lanterns, including Abin Sur, Sinestro, Kilowog, Mogo, and Rori Drag.  In addition to the formidable talents of Fillion and Moss, the voice cast also includes Jason Isaacs and Henry Rollins, in what is certainly one of the most eclectic groupings in recent memory. Extras include a sneak peek at this spring’s All-Star Superman, as well as a sneak peek at a forthcoming DC animated film.

Speaking of interesting casts, The Company Men stars Ben Affleck, Tommy Lee Jones, and Chris Cooper. If I had a company, I wouldn’t mind them being my men (uh, not like that). Set in the early part of the last decade, the film follows the three men as they try to survive corporate downsizing.  Kevin Costner also stars as Affleck’s brother. The movie debuted at Sundance last year, and picked up good reviews when it was released earlier this year.

With Zack Snyder’s Man of Steel due out next year, Warner Bros. has released this set of all five theatrical Superman films, for better or worse. For better: 1978’s Superman, thrillingly directed by Richard Donner, an epic which invented the modern superhero movie; and 1980’s Superman II, the goofier but undeniably rousing sequel. For worse: well, pretty much everything else. 1983’s Superman III is an unbearable Richard Pryor movie featuring what feels like an extended cameo by the Last Son of Krypton, and 1987’s Superman IV: The Quest for Peace is barely any better. 2006’s Superman Returns was Bryan Singer’s failed attempt at reviving the franchise, ignoring the third and fourth films and instead picking up five years after Superman II. It’s broody, symbolic, and yes, still a failure–but at least an interesting one. Unless you’re a Superman fanatic, you can skip this set and just stick with the first two, in which Christopher Reeve gives a marvel of a performance as both the nerdy, bumbling Clark Kent and the heroic Superman. You’ll believe a man can fly, but if you watch the others, you’ll also realize that whatever goes up, up, and away must come down. Overall:

THE BRIDGE ON THE RIVER KWAI (Blu-ray)

Filmmaker David Lean’s most famed film after Lawrence of Arabia is the one that directly preceded it: 1957’s The Bridge on the River Kwai, a World War II epic that was made at a time when “epic” wasn’t a word that was just thrown around. Clocking in at over two-and-a-half hours and featuring one of the most explosive climaxes in film history (“Madness…madness!”), it’s a genuinely outsized film. William Holden, Sessue Hayakawa, and especially Alec Guinness all do fine work. The film is sure to look beautiful on Blu-ray.

One of my favorite Westerns, dare I say almost on a par with Unforgiven? Yes, I think I dare. In fact, Orson Welles himself once named this among his favorite films. Eastwood plays the titular Wales who starts out not as an outlaw, but rather a humble Missouri farmer. But wouldn’t you know it, some unpleasant Union soldiers murder his family and so farming takes a back seat to revenge. It’s a pretty familiar tale, but one incredibly well-told, and populated with some terrific performances. Chief among them, of course, is Clint’s steely, haggard, broken man who gradually learns that revenge kills more than just the bad guys. John Vernon and Bill McKinney turn in great performances as the two main antagonists. And Academy Award nominated Chief Dan George as the charismatic Lone Watie is a joy. I’m taking one wattle away for introducing Sondra Locke to the Clintverse, though. That was uncalled for. Extras include an introduction by Eastwood, a making-of doc, a featurette about Eastwood, a trailer, a new documentary entitled Clint Eastwood’s West, and a new commentary by Richard Schickel.

Before Adam Sandler had completely worn out his welcome, he made me laugh till I wet myself with his anti-mini-golf rage and his ass-whuppin’ by Bob “Bitchslap” Barker. Add in a one-handed Carl Weathers, a one-eyed alligator, and a tasty Julie Bowen, and how could anyone not love this film? (I’m looking at you, AJ.)

For a more complete listing of new releases, be sure to check out Video ETA.