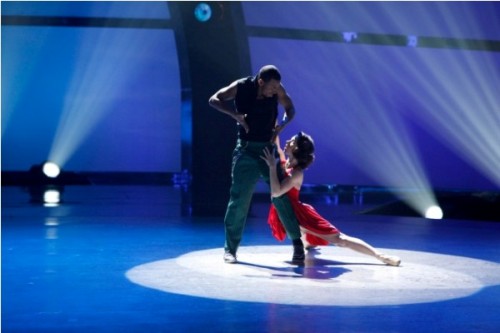 This will be super brief, guys. It’s late (both in terms of how long it’s taken me to post this and the hour at which I’m typing this very sentence), so I’m not going to dilly-dally. Sad as it is…

Welcome… to SO YOU THINK YOU CAN DANCE!

Every elimination episode opens with a group number by the entire surviving cast of dancers. This week it’s a pretty week and uninspired piece choreographed by Michael Bruni (sp?), set to the song “Incredits” from the soundtrack to the Pixar film THE INCREDIBLES. Boring dance, major props for song choice. I’ll balance it out at…

Cat Deeley is always adorable, pretty much no matter what she’s wearing. Case in point: someone attacked her neck with a Bedazzler tonight and it looks good!? But she still has to deliver bad news, so she calls the first three couples up on stage with her.

Nigel reminds us that National Dance Day will be July 30th this year. There will be three dance routines up on the website fox.com/dance this week, choreographed by NappyTabs, Robin Antin, and Mary Murphy. You can go to the website and learn whichever routine you’d like and then send in videos of you (and as large as group as you can get) dancing it. I’m not sure on all the particulars, such as prizes, etc. But I’m sure the website has all the info you might need.

Before we get to see the bottom three couples dance for their lives in their solo routines, we get the first of two guest performances. This one is by the AXIS Dance Company, whose mission is to create dance collaborations between performers with and without physical disabilities. The dancers are Sonsheree Giles and Rodney Bell, and they are amazing. I highly recommend you check out their website, which includes video of this performance. Truly stunning.

Ashley dances to “For You” by David Ryan Harris. It’s just okay.

Chris dances to “You’re Gonna Make It” by KJ-52 (?). It’s very graceful and energetic, with plenty of flips and acrobatics.

Miranda chooses “Unthinkable” by Maria Zouroudis. The problem with contemporary dancers is their solos tend to all look kind of the same. Though not especially complex or original, her lines are pretty extraordinary.

Robert gets his funk on to “I Don’t Need It” by Jaime Foxx. The B-boys and hip hop dancers tend to be the most entertaining when it comes to these solos, and Robert definitely brings speed and energy to his dance here. But it’s far from the best example of his skills we’ve seen.

Caitlynn dances to “It Doesn’t Hurt” by Katie Thompson. *shrug*

Mitchell plays the popularity card and dances to “Rolling in the Deep” by Adele. While I’m dangerously close to be completely burned out on that song, I have to admit Mitchell uses the strength of her voice to energize his performance.

While the judges deliberate backstage, we get the second of tonight’s guest performances. Eric Luna & Georgia Ambarian, World Cabaret Champions. And they. Are. GLORIOUS! Seriously, their number, set to “Calypso” from the PIRATES OF THE CARIBBEAN: AT WORLD’S END soundtrack, is absolutely mindboggling. I’m not officially rating any of the guest performers on these results shows, since they’re not part of the competition. But if I were, this couple would get a 5++ Wattle rating!

I can’t remember all the comments the judges give to the dancers in danger before announcing their decisions, so drum roll please, I’ll just tell you who gets cut tonight…

Miranda & Robert. Another couple. I’m looking forward to seeing them split two couples sometime soon so we can start mixing and matching the surviving singles into new pairs. This couple wouldn’t have been my choice to send home tonight, but I wasn’t overly upset by it. For whatever reason, this year I’m more set on my favorite couple very early on than I have been in seasons past, and so I’m a little less invested in the other dancers. It pains me to say that, and I sincerely hope that as the number of dancers gets smaller and we get to spend more time with the others I’ll fall in love with all of them the way I’ve tended to fall in love with the entire cast the last few years. But for now, as long as M & M are safe I’m not too excitable.

What about you? Agree or disagree (with me OR the judges)? Does my admitted bias for one particular couple make this column a complete waste of your time? Vent your spleen here in the comments or in a strongly worded e-mail to gobbledygeek@yahoo.com.