Anyways. War in the Sun kicks off with another Secret Origins-style one-shot, this one focusing on Herr Starr. Like the Saint of Killers mini, I think this is one of the more essential flashbacks Ennis has given us, not necessarily for what it contributes to the story (you could skip it and the whole thing would read just fine), but because it sheds light on a character who could otherwise be perceived as a bit two-dimensional. Both the audience and Brendel, whom Starr goes on to betray, believe that when Starr cradles the little girl following the 1972 Munich Olympics massacre, he’s mourning her senseless death. Turns out we’re wrong: he was “looking at the face of chaos,” weeping for a world that lacks order. “I am at war. I have been all my life. And I would kill a million little girls to win.”

Paul: This volume is the most cinematic of the entire series. Not only the big, epic stuff we’ll be gettin’ to in a minute, but even this opening issue. The banality of power, the horror of ambition and righteousness…probably my favorite of all the one-shots and specials, even more than the Cassidy one.

AJ: “Cinematic”…exactly. That word gets bandied about a lot in describing comics, but it isn’t always necessarily true. But what other word could you use to describe the wide-angle insanity that occurs in these pages? The two-page spread of a pre-nuclear-explosion Monument Valley with a half-smiling Jesse saying that he doesn’t know what’s going to happen here, but something will? The Saint of Killers standing down an army of tanks? The splash page of the wannabe astronaut’s “FUCK YOU” to the stars? Big ideas with big emotions and big visuals…that’s pretty damn cinematic to me.

AJ: Oh, absolutely. Jesse sings fucking “Streets of Laredo” while walking away from a nuclear explosion.

And? What else did we get in that issue? C’mon…say it….

AJ: That whole war in Monument Valley was incredible. It feels like the series has been building to this conflict from issue one; hell, it could have been the goddamn climax, but we still have three volumes to go! I was sitting on the floor while I read this, but I’m still gonna go ahead and say that I was on the edge of my seat the whole time. It gets started with a breakthrough moment for Jesse and Tulip, as Tulip tells him that he better not leave her behind this time. His response? “Matter of fact–ain’t no one I’d rather have backin’ me up.” “Let’s go.” From those words straight through to “Not enough gun,” my spine was tingling.

Paul: God, I love this bloody book so much. But let’s not just sit here and gush, let’s discuss. How are we feeling about the characters at this point? Are we still on board with Jesse’s quest? His search for God, and the forces he’s drawn together in the process, are causing a lot of collateral damage along the way. And I’m not just referring to the 2800 dead or dying in the Arizona desert

AJ: Not to mention inflicting Arseface upon the record-buying public! Am I right?! …Ahem.

You’re right. There has been a lot of collateral damage. That’s an understatement, actually. And yet while there is undoubtedly a sense of self-righteousness at play, I think it’s a worthy quest. God gave up on his creation and must be held accountable for it. The conversation shared between Jesse and Cassidy the night before the battle sums it all up nicely. Cass says that there’s no point trying to change what can’t be changed: “That just leads to idealism. An’ idealism’s shite.” Jesse himself admits that he doesn’t know what the end result of his quest will be, but he feels like there’s a chance to make God do right by humanity, and “so long as that chance is there, [he] cannot ignore it.”

Paul: Glad you mentioned that Jesse/Cass scene. Another in a growing series of moving character moments and significant, meaningful dialogue. And I’ll just draw you’re attention to the bit where Jesse wonders what he would do if he had to lose everything the Saint lost before damning himself.

Also significant, Cassidy talking to Tulip about the past being the past, and how helping Jesse might be his last chance at redemption.

AJ: “I don’t think you’d ever do what he did, Jesse. No matter what. An’ I’ll be honest with yeh: I couldn’t give a fuck which of us is right or wrong.” I heart Jesse and Cassidy. Which is a bit of a complicated sentiment, given what ends up happening here. Dixie Fried established that Cass is in love with Tulip, whether out of true impulses or because he’s under a bad luck curse and therefore destined to fuck everything up, we know not. She’s never liked him that much, and has spurned his advances at every turn, calling him disgusting, pitiful, etc. But once it appears that Jesse’s dead and he’s the only one there to give her affection…well, she gives in.

Let’s back up to the Monument Valley battle for a moment. Jesse falling out of the plane…there’s that c-word again. That’d be “cinematic.” It’s one of the most thrillingly staged and executed comics scenes I’ve ever read. Cass burning up in the sunlight as he clings to Jesse, Jesse shouting for Cass to tell Tulip that he loves her, and then commanding Cass to let go. And of course, Cassidy doesn’t tell her, not even when Tulip asks if Jesse said anything before he “died.”

Paul: I hinted at that let go moment last week, because even though it’s been the “not enough gun” I’ve been pimping, Cassidy having no choice but to let his best friend (and salvation) fall to his death gives me chills and chokes me up every damn time I read this series.

AJ: Chills? Check. Choking up? Check. Right there with you. 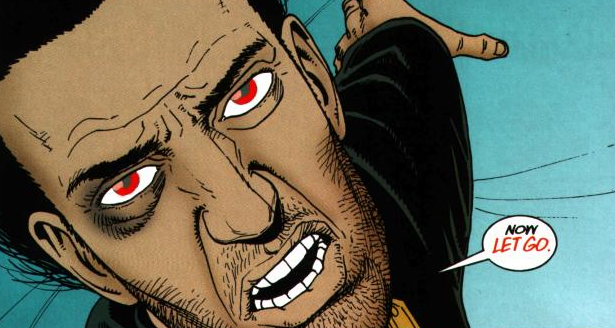 Paul: And the tragedy of Cass continues as we jump forward a month and see him actually trying, in his own flawed way, to take care of Tulip. It’s demented and sad, but he has been making a genuine effort to care for her without stepping over the line. Of course, drugs…but as we’ll see, Tulip has a complicated relationship with all the men in her life. [evil foreshadowy laugh]

AJ: Up until the last volume, Cassidy was portrayed as the most thoroughly decent character Preacher had to offer. Then things got a bit thornier, as more of his past was revealed and we found out that he had broken up his friend’s marriage and basically acted like a total shit. We see some of that shittiness here too. I do not for a second want to suggest that Cass is glad Jesse is presumed dead–quite the opposite. Still and all, though, you have to imagine that there’s a sense of relief on his part that he can finally be with the woman he loves. Like you said, he resists Tulip’s initial, grief-stricken pleas for “help.” After a month, though, he just can’t help himself. Jesse walking up to the café with his new dog Skeeter, grinning from ear to ear at the prospect of being reunited with Tulip and Cass, only to see the two of them kissing, was rough. I can’t imagine this is going anywhere good.

Paul: My friend, I’ll promise you this: shit gets way, way uglier before it gets better. If this series doesn’t get you to openly weep at least once, then you are the Saint of Killers.

Paul: So, amidst all this epic bloodshed, bromance, and badassery, we also have the ever more farcical journey of Herr Starr. And Johnny Lee Wombat…one of the greatest character names ever.

AJ: I have to say, I quite enjoyed the little detour with Johnny Lee Wombat (yep, great name). It’s a story of pure American ambition, which of course involves cutting corners and faking records, all to get to space. With his giant “FUCK YOU,” the guy is definitely a few thrusters short of a…help me out here, I can’t finish this space pun…anyway, he’s cuckoo bananas, sure. But what he says about channeling your anger into something positive rings very, very true. Sometimes all you do wanna do is say “fuck you” to the world. And by God, he did.

As for Herr Starr’s cannibal buddies…I’d say “farcical” is the right word. As such, it led to some funny moments, such as the big guys falling on top of him after he shoots them and then him hobbling away and repeatedly falling over on his one remaining leg.

Paul: I love that bit. And it may be film nerd blasphemy to say this, but I now hold “wub” in the same shuddery, frightened corners of my soul as “you sure got a purty mouth.”

So, Paul, with “not enough gun” finally off the table, what can you tell us about what the future holds?

Paul: The most fucking hilarious application of the KKK since Blazing Saddles. Spaceman. A very compelling case for becoming vegetarian. “How come you shitheads never write?”

AJ: I’m guessing that’s not Dr. Spaceman from 30 Rock? (And that’s the second 30 Rock reference wasted on you over the course of our read-through. I don’t know why I even try.)