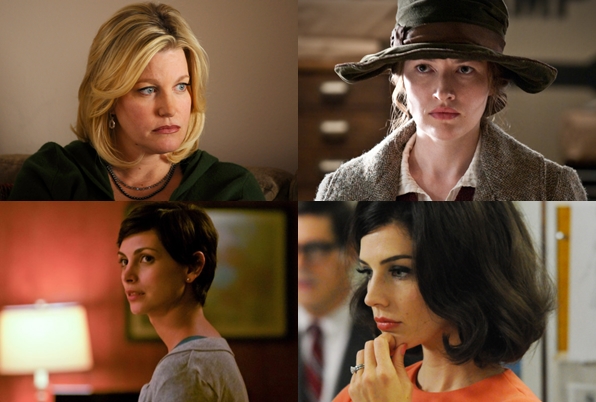 Don Draper is a serial philanderer. Walter White is a meth kingpin. Nicholas Brody is a (possibly) reformed terrorist. Nucky Thompson is a gangster. These are not men who do good things. Why, then, do audiences hate their wives so much?

Don, Walt, et al. are enormously popular with viewers, and rightfully so. They’re not necessarily good people, but they’re not strictly bad people either; they’re contradictory, complex, nuanced, comprised of all the elements that make for great drama. If, like myself, you enjoy reading reviews or seeking out online reaction to each episode, though, you’ve probably noticed a worrying trend. Though many applaud the behavior of these characters, all murderers (save Don) and adulterers (save Walt), they’re a lot less willing to afford their wives the benefit of the doubt. Look, I’m not here to be the Moral Police; I’m not interested in discussing the pros and cons of infidelity, especially considering most of these characters’ wives are guilty of same. (Sidenote: I, uh, hope we can all agree murder is bad.)

And it’s not like I don’t get the appeal. I don’t watch Breaking Bad just because it’s a devastating portrait of a man sacrificing everything he holds dear at the altar of power. I also watch it because it is freaking awesome when Walt pulls off the perfect heist. How giddy did the classic “RUN” moment make me? Answer: very. And at the end of the Mad Men season finale, when Don gave the honey at the bar the patented Draper Stare…goddamn. As a viewer, I know full well how thrilling and visceral it can be to watch these men do their dirt. The problem is when you view them as the heroes of their respective stories and any attempts–especially by their wives–to curb or question their behavior as hindering their quest, whatever you think that is. The numbers show that not a whole lot of people actually watch Breaking Bad, and I know that its small but loyal following contains some of the sharpest TV viewers around. But the Internet would also lead me to believe that a bunch of folks would be okay with a show where all Walt does is make meth, kill people, and become the most awesome greatest badass superhero on the planet.

ZODIAC MOTHERFUCKER is one of my favorite Twitter users. Dedicated to the pursuit of “ownage,” he is exactly the kind of viewer who would be fine with Walt straight-up destroying people all the time. ZMF is hilarious, and I honestly have no idea if he’s for real. Regardless of whether or not he’s a genius parody or an actual connoisseur of ownage, in his comments on The A.V. Club’s review of the Breaking Bad season premiere, he expressed opinions that a sizable chunk of the viewership holds: “FUCK SKYLER. NO SYMPATHY WHATSOEVER,” Walt’s a “LOVING HUSBAND,” if Skyler gloating to a lying and deceiving Walt that she cheated on him “AINT ABUSIVE I DONT KNOW WHAT THE FUCK IS,” and “AS FOR WALTS MISDEEDS FINE CHALK IT UP TO PRIDE IF YOU WANT BUT AT THE END OF THE DAY HE PROVIDED FOR HIS FAMILY PLAIN AND SIMPLE AND WHEN WALTS GONE SKYLERS GONNA HAVE NO PROBLEM WHATSOEVER SPENDING THE MONEY THAT HE MADE AND ENJOYING A LIFETIME OF SECURITY THAT HE PROVIDED FOR HER.”

Something you can unfortunately find on the Internet.

Maybe ZMF isn’t legit. Let’s take a look at some supposedly real people. I recommend reading Alyssa Rosenberg’s and Stephen Silver’s pieces on Skyler hate, but also the comments sections. There, you’ll find such gems as “I’m hoping that she comes down with a bad case of Ricin poisoning by the end of the show”; “It would be a great season finale to have Walt kill off his bitch wife” (this comment also made mention of actress Anna Gunn’s apparent “superficiality”); “Textbook BITCH!”; “she’s a bitch and a whore”; “She is acting like a bitch, constantly standing in the way, constantly being a nuisance.” Even ignoring the context of Skyler’s actions–her husband is a lying, murdering drug dealer who constantly puts her and their children in very real danger–look at the words that are getting thrown around. “Bitch.” “Whore.” Then there’s the matter that one commenter was somehow able to extrapolate that Gunn herself is superficial because of what her character does on a TV show. Yeah, yeah, the Internet is a hive of scum and villainy, but this is the kind of thing I see all over the place.

It bothers me, but I can kind of understand the vitriol heaped upon Skyler. She can be a strident, overbearing character, which is by design and superbly played by Gunn.   But then you have a character like Boardwalk Empire‘s Margaret Schroeder, married to bootlegger Nucky Thompson. At the start of the series, she’s innocent and deeply moral, and is brought into a life of corruption by Nucky. Granted, she takes to it to a degree that surprises even herself, but she has remained one of the series’ most sympathetic characters; if you don’t love Kelly Macdonald, you might not be human. This apparently describes a number of commenters on this TV.com review of Boardwalk‘s second season finale. Sample comments: “possibly the most annoying character on the show, that woman needs to go in a big way”; “They could have killed off befuddled-looking and manipulative Margaret Schroeder and many would be elated”; “Margaret is a cheating bitch.” That last comment goes on to explain why Margaret is such a bitch, including the fact that Nucky is “really nice to her kids.”

Then there’s the well-documented hatred of Betty Draper over on Mad Men. I don’t like Betty either. You’re not supposed to. She’s a petulant, cold, cruel, emotionally stunted woman-child. I think she’s a fascinating character, almost as much as Don, but I won’t spend time defending her when Jen Kalaidis has already done such an excellent job. What I find interesting is the reaction to Don’s second wife, Megan. Megan is by no means perfect; she slept with Don when he was her boss (and otherwise taken) and has taken advantage of her husband’s position at Sterling Cooper Draper Pryce. But compared to Betty, who can barely even feign love for her own children, Megan is a radiant beacon of hope and optimism. She’s an idealistic, ambitious actress attempting to pursue her dreams, and she even tried to get stodgy old-fashioned Don to listen to “Tomorrow Never Knows.” I like her. A lot. I’ll be honest and admit that I can’t find any outrageous examples of Megan hate, though Google recommends such searches as “i hate megan on mad men,” “i dislike megan draper,” and “i can’t stand megan draper.” Reading along with reviews each week, I can attest to the fact that more than a few people are using those search terms. So you hate the frigid ice queen, but you also hate the warm idealist? Presumably because she gets in the way of Don banging every other woman in New York City?

Megan Draper will never host an awkward dance party for you.

These men can do terrible things and be awesome and cool, but when the women in their lives do things just as bad or simply stand in the way of their husbands doing something terrible, they’re immoral bitches who deserve death. It’s a double standard, and a blatantly sexist one. Though I think most of these reactions speak to certain viewers’ unconscious (or maybe conscious, I don’t know) sexism far more than they speak to the shows’ quality, I have to say that TV creators and writers are not blameless. Television, like all mediums, has often struggled with creating strong and interesting female characters. I can’t remember the name of Brody’s wife on Homeland, even though she’s played by Morena Baccarin and I usually agree with what she says. She’s just not much of a character without Brody to fight with or be disappointed in. The Walking Dead‘s Lori Grimes is one of the few TV wives I legitimately loathed, and though there was a nasty edge to the fandom’s hatred of her (guess what she was most often called), she was never particularly well-written or -defined as something other than “awful wife.” In an episode this season, she even said, “I won’t win any Mother of the Year awards,” which seems a bit redundant to point out in a post-apocalyptic wasteland.

Of course, we have The Sopranos to blame for all this. In the late ’90s, David Chase ushered in the cable boom which is currently giving us most of our best TV series, but with Carmela Soprano, he solidified an unfortunate archetype. I don’t blame him or the show for this–Carmela was great, Edie Falco was fanastic and deserved all her Emmys–but the majority of worthwhile TV dramas since have taken The Sopranos‘ lead. It’s amazing how many series are about damaged male protagonists with worried/overbearing wives. It’s worth pointing out that all of these shows were created by men. Does a world exist where we can we have a damaged female protagonist whose husband frets and worries and doesn’t understand? Should we? Do we want that? I couldn’t even think of a show that had gone that route; a Twitter friend mentioned Army Wives, though she pointed out that their attempt wasn’t very good.

The slew of Bad Guys/Worried Wives shows on the air right now won’t be the last. Moreover, they’re some of the finest examples of television as an artform we’ve yet seen. But something has to change. When you’re watching Breaking Bad or Boardwalk Empire, think for a second before you call Skyler or Margaret a “bitch.” Really think about why you feel that way. Don’t like the character? Hey, that’s fine. There’s no need for this kind of sexist attitude to prevail, though. And for those actually making TV, there also needs to be a change. Flipping gender roles would probably be interesting, but I’m not sure that’s enough. We need another David Chase to come along and break the mold, to shatter our preconceived notions of what TV drama is capable of. I can’t tell you who it’s going to be or when it’s going to happen, but I can’t wait for him or her to blow my mind.