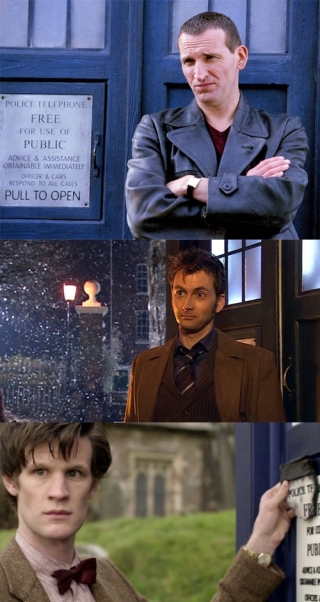 The Gobbledygeek season 5 premiere, “Geekier on the Inside (feat. Eric Sipple),” is available for listening or download right here, and on iTunes here.

Gobbleydgeek has regenerated for a fifth season; no new hosts, alas, but faithful companion Eric Sipple is on hand to guide Paul and AJ through a discussion of the first five seasons of Doctor Who. Yes, the boys have finally succumbed to curiosity, exploring one of their major geek blindspots, starting with the Russell T. Davies “reboot” of the age-old tale of a strange man in a box who travels through time. They discuss the surprising greatness of Christopher Eccleston’s Doctor, the many highs of the David Tennant era, and the very beginning of Matt Smith’s tenure, not to mention just how freaking annoying Dalek voices are. Oh, and AJ tells some wonderful jokes. Plus, the gang updates you on The Deli Counter of Justice and talks about whatever passes for New Year’s resolutions.

(Show notes for “Geekier on the Inside.”)