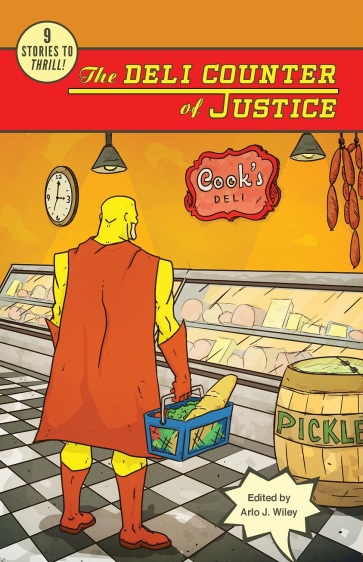 The superhero short story anthology The Deli Counter of Justice is now available on Amazon in both physical and digital formats. The paperback is listing for $13.99, while the Kindle version runs $6.99. If you’re not familiar with the collection (you can check out all of our author interviews and posts here), here’s what it’s about:

For decades, Carl Cook fought crime in the city of New Caliburn as the superhero Piecemaker. With the power to disassemble most everything around him, Carl was very good at taking things apart; less so at putting them back together. One divorce and an alienated daughter later, he realized the toll heroing had taken. In an attempt to move on and take charge of his life, Carl hung up the cape and opened Cook’s Deli.

But things are never that simple in the superhero capital of the world. Cook’s Deli has a front-row seat to the city’s superpowered exploits, from the exciting to the bizarre. A former sidekick discovers just how hard life is without a hero, a psychic rat goes on the warpath for another slice of rye, a D-list villain plots his revenge…these are just some of the adventures going on right in front of the deli counter. Carl may change the world, even more than he did in costume. Only now he does it one cold cut at a time.

The book was edited by our very own Gobbledygeek co-host Arlo J. (AJ) Wiley, alongside Paul Smith and Eric Sipple. We are very excited to finally bring it to the public. We hope you enjoy it.

For an alternative to Amazon, please feel free to purchase the book via Smashwords.

Continue after the jump for a new installment of The Deli Podcast of Justice.

The Deli Podcast of Justice #12 is available for listening or download right here, and on iTunes here.

AJ, Paul, and Eric take you behind the curtain to talk a little about what led us here, what the process of putting the book together was, and what you can look forward to in the future. That’s right, this isn’t the end. It’s just the beginning.

(Show notes for The Deli Podcast of Justice #12.)