A feat even more miraculous than Paul and Arlo agreeing on the same movie? Successfully juggling a cast of dozens in an interplanetary epic that shakes up the world’s most popular film series. That’s exactly what Joe & Anthony Russo have done with Avengers: Infinity War, a daring space opera that acts as a culmination of a decade’s worth of superheroic blockbusters while taking the Marvel Cinematic Universe in new directions. The boys discuss how (nearly) each character gets their due, why Josh Brolin’s Thanos more than lives up to the hype, and where the MCU goes from here. Plus, Arlo binges the Disney Renaissance and MoviePass takes an unsurprising heel turn. 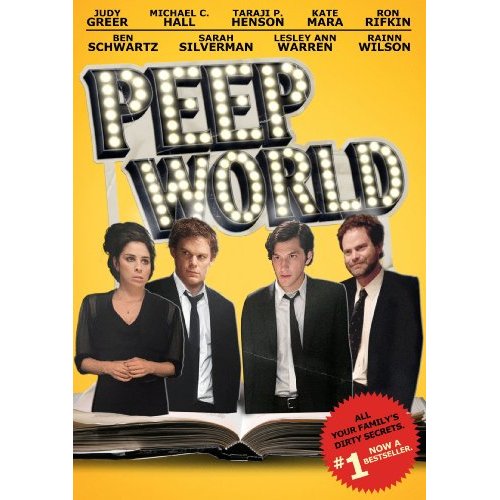 How come TV actors so rarely get a break on the big screen? The general consensus seems to be that we’ve moved beyond the age of the Movie Star–just look at how little anyone cared about Tom Hanks and Julia Roberts’ Larry Crowne–so why is it still so hard for TV actors to make great movies? Take a look at Peep World. You’ve got Michael C. Hall, who’s given stunning performances on Six Feet Under and Dexter; this man should be working with A-list directors, but instead he makes stuff like Gamer. You’ve got the trifecta of Rainn Wilson, Judy Greer, and Sarah Silverman, all of whom have done very funny work on television. The closest any of them get to cinematic greatness is Wilson’s bit part in Juno. TV’s time-consuming, I know. But when you look at a mess like Peep World, you wonder how so many talented TV people got thrown into such a bad movie. In a way, it reminds me of The Great New Wonderful, an awful movie that inexplicably starred Edie Falco, Will Arnett, Jim Gaffigan, Tony Shalhoub, and Stephen Colbert. Peep World isn’t nearly as bad, but its story of an oh so dysfunctional family feels like an unpleasant tenth-generation copy of The Royal Tenenbaums. It has no style, little wit, and the narrative is all a-shambles. With this many talented actors involved, there are bound to be some effective moments, and there are. But if a filmmaker with respect for and knowledge of the medium had been given the same budget and the same cast, something special could have happened. Extras include deleted scenes and a theatrical trailer.

END_OF_DOCUMENT_TOKEN_TO_BE_REPLACED

Last week, Paul and I reached the halfway mark of our countdown of the Top 100 Characters in Modern Pop Culture. Here are excerpts of our thoughts on our picks for #s 60-51, but be sure to listen to the show for our full rundowns.

PAUL: Vincent (Beauty and the Beast)

Speaking with a gruff but gentle whisper and all but hidden beneath an impressive leonine Rick Baker prosthesis (which didn’t, but absolutely should have, won awards), Perlman was the very definition of Romantic-with-a-capital-R misunderstood emo monster heroes for a generation.

His regained ability to walk gave him a new lease on life, and he looked at the island as a beautiful, supernatural force. He refused to leave, and tried to get the rest of the group to stay as well, believing them to be there for a greater purpose. The constant push-and-pull between Jack, the man of science, and Locke, the man of faith, became the series’ core thematic conflict.