Gobbledygeek episode 287, “Time of the Preacher,” is available for listening or download right here and on iTunes here.

Willie Nelson, John Wayne, preachers, bloodsuckers, angels, and arsefaces. Welcome to the world of Garth Ennis and Steve Dillon’s classic Vertigo comic book Preacher, which has now been adapted into a television series on AMC courtesy of Seth Rogen, Evan Goldberg, and Breaking Bad‘s Sam Catlin. Paul and Arlo previously analyzed the comic book on the blog back in 2012 and now set their sights on the show’s recently wrapped first season. The show takes an interesting route in exploring this tale of a small-town preacher cursed with the Word of God; namely, the ten hours that aired this year feel like a prologue to the series proper. The boys discuss the effectiveness of that approach; the spot-on casting of Dominic Cooper, Joseph Gilgun, and Ruth Negga as the unholy triumvirate of Jesse, Cassidy, and Tulip; how the series stays true to the spirit of Ennis and Dillon’s work, even without being able to drop an F-bomb; and what they hope they’ll see in the second season. Plus, Paul travels No Man’s Sky and Arlo becomes a beach bum.

Next: film buff Scott Stamper makes a pact with Paul and Arlo to discuss Suicide Squad.

(Show notes for “Time of the Preacher.”) 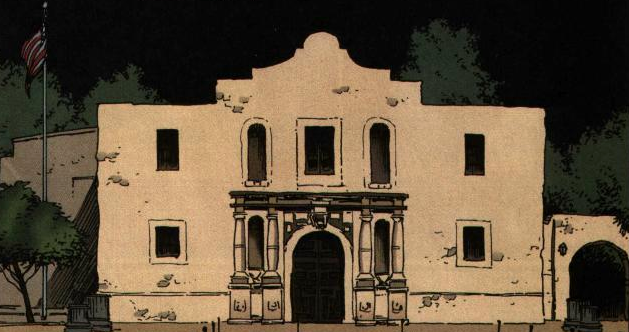 Nine volumes. 66 issues. Five one-shot specials. A four-issue tie-in miniseries. And a tanker truck full of blood and guts. Our pissed-off preacher, gun-toting girl Friday, and blood-drinking BFF all converge, where else? Texas. The Alamo, to be precise. And things get both big and small, epic and very, very personal.

Oh, and one poorly written report gets taken out behind the woodshed and shot the fuck up.

So AJ, mi compadre, what did you think of the grand finale?

AJ: Where to begin? Perhaps it’s best to start with my one sizable complaint before moving on to everything that worked so, so well here. Last week, we talked about the watering-down of Herr Starr, of how even though he’s the series’ ostensible antagonist, his misadventures have often been treated as comic relief. Maybe I just wasn’t paying enough attention, but I completely failed to realize that taking revenge on Jesse had supplanted bringing about Armageddon as his goal in life. So when he announced his plans to the Elite Council, I was just as confused as they were (luckily, I didn’t get murdered right after). I feel like a discussion of Starr as the series’ Big Bad could take up its own post, so I’ll just say that though I loved the vast majority of what we ended up getting, I can’t imagine what an epic ending Armageddon could have provided.

END_OF_DOCUMENT_TOKEN_TO_BE_REPLACED

AJ: Here we are. The penultimate volume of Preacher. Given the title and the fact that we’re very near the end, I thought there would be a lot more violence and bloodshed. Instead, All Hell’s A-Coming turns its focus inward, with a lot to say about our heroes and their pasts. The past is a big theme here, not only because of the extended flashbacks but also because people and things from long ago keep coming back to add wrinkles to the story.

Speaking of those extended flashbacks, where should we start: Tulip or Cassidy?

Paul: I say we take it in order, so Tulip.

AJ: The beginning of this volume is all kinds of heartbreaking. A listless Tulip dragging herself out of bed, trying and failing to find the drugs she’s felt she’s needed for these past months. Last we saw Cassidy, we were beginning to realize that he might not have been the fundamentally decent person we thought he was. That continues in the opening scene, as he tells Tulip that everything’s all right, she only needs her medicine, and “Don’t make me take that fuckin’ guy away from you.” Followed immediately by Tulip blasting him into the sunlight. Tulip flees the hell that Cassidy has made for her, then we learn all about how she became who she is.

END_OF_DOCUMENT_TOKEN_TO_BE_REPLACED

Paul: So this volume, Salvation, is kind of an intermission in the main story. We get to see what kind of man Jesse is removed from the quest and his group of friends. And as it turns out he’s just as much the Big Damn Hero in this smaller setting as when he’s hunting down God and facing off with saints and lunatics.

How did you feel about this step back from the bigger picture?

AJ: I loved it. It’s impressive how much I enjoyed Jesse’s exploits away from Cassidy, Tulip, Herr Starr, etc. It took me a second to realize that we weren’t going to see most of our old friends (excepting Jesse’s vision quest near the end), but once I adjusted to that, I found Salvation to be one of the most satisfying volumes yet.

END_OF_DOCUMENT_TOKEN_TO_BE_REPLACED 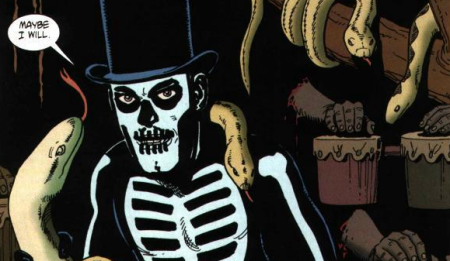 AJ: As much as I’ve had my problems with Arseface thus far, any time he said something like that in this volume, I cracked up. UHFUH.

AJ: He really is. And the gang cracking up while he has them at gunpoint? How can you not laugh at that?

END_OF_DOCUMENT_TOKEN_TO_BE_REPLACED

Welcome to week 4 of 9 in our analysis of Garth Ennis and Steve Dillon’s Preacher. Read the past installments here, here, and here.

AJ: After three volumes of mayhem, destruction, bloodshed, blasphemy, and a heapin’ helpin’ of profanity, the Preacher TPBs take a breather with…well, “breather” might be the wrong word. “Diversion” is more like it. Jesse, Tulip, and Cassidy are out of the picture this time as Garth Ennis and a couple guest artists flesh out the backstories of the Saint of Killers, Arseface, and Jody ‘n T.C. Last week, you called this collection “inessential.” Having re-read it, do you still feel the same?

Paul: I’m afraid I actually feel it even more strongly than I remembered. This won’t happen very often at all over the course of these discussions, but I’m going to say that the stories this time around are just not very good. I mean, getting the backstory of the Saint of Killers (or more accurately, a version of his backstory) is cool and interesting. But it also takes the exaggeration and clichés of the main story and really turns them up to 11. And while both Steve Pugh and Carlos Ezquerra have done pretty great stuff elsewhere over the years, here I think they really suffer from being “fill-in” artists for Steve Dillon.

The Arseface and Jody & T.C. stories are straight up pointless.

END_OF_DOCUMENT_TOKEN_TO_BE_REPLACED

Welcome to week 3 of 9 in our analysis of Garth Ennis and Steve Dillon’s Preacher. Weeks 1 and 2 can be found here and here.

AJ: Last week, you said that Preacher is Garth Ennis’ love letter to an idealized America. Fittingly enough, this third volume is entitled Proud Americans. It opens with a tribute to unfairly treated Vietnam vets, closes with Cassidy’s immigrant’s ode to America, and in between continues Jesse’s struggle between modern ways of thinking and his own manly American moral code. The book also encompasses much more than that, with Jesse’s rescue of Cassidy from the Grail, but those moments seemed the most heartfelt. I didn’t entirely see the love letter aspect last week, but now I completely see what you meant.

Paul: I’m glad my comment makes sense now. I think the love letter aspects were definitely present in the previous volumes, but this volume most definitely brings that theme front and center. It’s sometimes a challenge for me to comment on this series as if I haven’t read the entire thing before.

END_OF_DOCUMENT_TOKEN_TO_BE_REPLACED

Four-Color Flashback returned last week with the first of nine installments discussing the controversial Vertigo series Preacher. I’m new to the series, Paul’s been a fan since it first started in 1995, and we roundtable it. (Or is it a cross-table? There are only two of us.)

This week, we discuss Preacher: Vol. 2 – Until the End of the World…

Paul: Okay, Mr. AJ, you survived the first explosive, expletive-laden volume of Garth Ennis and Steve Dillon’s Preacher. Here we are, back for more, so tell me…how do you think the second volume, Until the End of the World, holds up?

AJ: I loved the first volume. I had some problems with it–Arseface, Detective Bridges’ sexuality–but on the whole, I thought it was a really entertaining comic with some brilliant ideas. I’m happy to report that Until the End of the World not only continues the witty, profane, blood-splattered fun of Gone to Texas; it also does it one better by introducing some seriously compelling bits of mythology.

END_OF_DOCUMENT_TOKEN_TO_BE_REPLACED

Last summer, I started a column entitled Four-Color Flashback, wherein I went through and discussed/analyzed a legendary run of comic books I’d never read. In that case, it was Chris Claremont and John Byrne’s Uncanny X-Men (read the first part here). It was a fun experience, and toward the end of the column, I stated the desire to return to the concept “some time in the next century.” That time is now!

Unlike last year, which was just me rambling on endlessly by myself, this summer, I’m joined by Paul to discuss Garth Ennis and Steve Dillon’s notorious Preacher. Paul is a huge fan, and I’ve never read a single issue, so we’re both bringing different perspectives to the table. The series lasted for 66 issues from 1995 to 2000, and has subsequently been collected in nine trade paperbacks. We’ll be going through them one at a time, starting this week with Preacher: Vol. 1 – Gone to Texas, collecting the series’ first seven issues.

So pull up a chair, do your best John Wayne impression, and enjoy.

(That was me commanding you with the Word.)