Gobbledygeek episode 490, “Guillermo del Toro’s Pinocchio” is available for listening or download right here, on Spotify, and on Apple Podcasts.

Is that a tree branch on your face, or are you just lying to me? An extra-long Gobbledygeek season finale takes root with a discussion of Guillermo del Toro and Mark Gustafson’s new stop-motion adaptation of Pinocchio. Paul and Arlo discuss the numerous ways del Toro has made Carlo Collodi’s immortal tale his own, chiefly by making it a study of mortality–oh, and fascism too. The boys rave about Ewan McGregor’s take on the Cricket, the awe-inspiring puppetry and animation on display, and Arlo’s pot-addled epiphany. Plus, tributes to Angelo Badalamenti and Stephen ‘tWitch’ Boss, as well as a look at the Spider-Man: Across the Spider-Verse trailer.

Gobbledygeek episode 464, “West Side Story (2021),” is available for listening or download right here, on Spotify, and on Apple Podcasts.

Somethin’s comin’, somethin’ good: this week, Paul and Arlo pirouette through a discussion of Steven Spielberg’s new take on West Side Story, nominated for Best Picture at this year’s Oscars. Is it a spoiler to say they love it? The boys discuss how Spielberg and screenwriter Tony Kushner’s changes enrich the text, why choreographer Justin Peck’s bold choice to discard Jerome Robbins’ iconic choreography was the right move, what it means for the Sharks to be played by Latinx actors, and the joy of watching Spielberg treat every musical number like his and Janusz Kaminski’s playground. Plus, Taco Bell sends Arlo spiraling into an existential crisis, and the boys chat about this year’s other Best Picture nominees.

NEXT: Si Spurrier and Jeff Stokely’s Six-Gun Gorilla is locked and loaded for this month’s Four-Color Flashback.

After 14 long years, the Incredibles are back. The superhero film landscape has changed drastically in that time–but, blissfully, Brad Bird and his retro supers have not, as they  teleport and babysit their way through another round of domestic struggles. Paul and Arlo discuss how Incredibles 2 inverts and deepens the themes of the first, why this is some of the finest superhero action ever committed to film, how Jack-Jack avoids Minion-ization, and why Bird and his films are not Randian. Plus, Paul plays a game of Tag, Arlo takes in a service at First Reformed, Paul keeps getting mistaken for Thanos, Arlo is obsessed with Guillermo del Toro, and Paul goes all Cloak & Dagger.

Next: this year’s superheroic Four-Color Flashback continues as Jed Waters Keith joins us to discuss Spider-Man: Origin of the Hobgoblin.

Even with a spoonful of sugar, Paul finds this week’s Geek Challenge hard to stomach. You see, he has invited Arlo to watch Robert Stevenson’s delightful 1964 classic Mary Poppins, in which a magical Julie Andrews and an accented Dick Van Dyke dance their hearts out while unlocking the joy hidden within a stuffy banker. In return, Arlo has forced Paul to endure Agnieszka Smoczynska’s 2015 goth music video The Lure, in which there is little magic but plenty of pain, blood, and desperation as two virginal maneating mermaids come of age. They’re both musicals, they’re both about women, and…that’s about where the similarities end. Some men just like to watch the world burn, and Arlo appears to be one of them. Plus, lots of great trailers; Sense8, Legion, and Westworld broaden sci-fi TV’s horizons; Brian Michael Bendis’ time with Spider-Man comes to an end; and Arlo finally watched Guillermo del Toro’s debut feature Cronos.

Next: after 14 years, The Incredibles 2.

Gobbledygeek episode 331, “The Shape of Water: Green Around the Gills (feat. Sarah Kosheff),” is available for listening or download right here and on iTunes here.

Come on in; the water’s fine. Sarah Kosheff joins Paul and Arlo to discuss Guillermo del Toro’s The Shape of Water, freshly nominated for 13 Academy Awards. Del Toro’s girl-meets-fish romance is one of last year’s most ravishing, visually sumptuous films, and the gang discusses why exactly that is. (Spoiler: they don’t all quite agree.) Topics of discussion include Sally Hawkins’ and Doug Jones’ tremendous wordless performances; Alexandre Desplat’s beautiful score, and how music is an important mode of communication in the film; the importance of color, specifically green; and how the film is, in del Toro’s own words, about the “beauty of the other.” Plus, Paul has joined MoviePass just in time for it to come under intense scrutiny.

Next: Paul just wouldn’t shut up about The Greatest Showman, so first-time guest Nathan Curtiss will be joining the boys to discuss the Hugh Jackman-starring musical.

(Show notes for “Green Around the Gills.”) 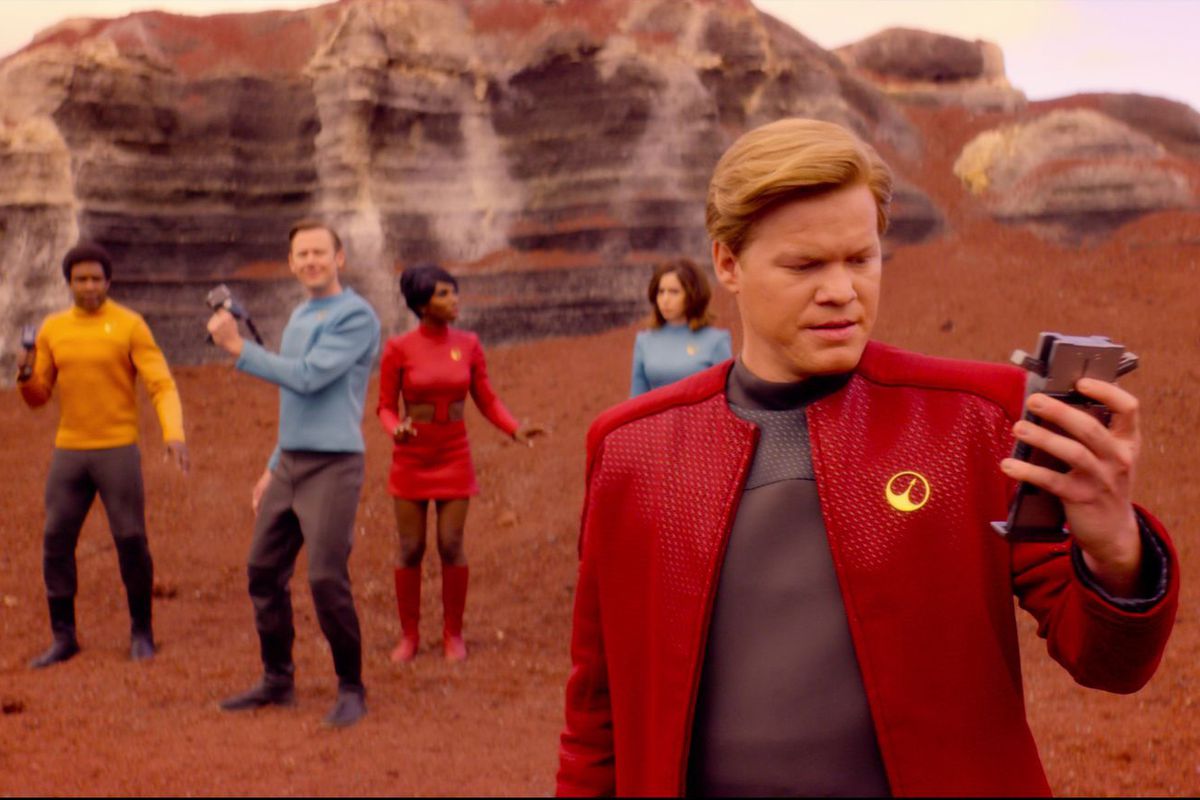 Ladies and gentlemen, we are through the tweeting glass. First-time guest Sarah Kosheff joins Paul and Arlo to discuss Charlie Brooker’s sci-fi anthology series Black Mirror in general, and the new fourth season in particular. The gang discusses how the series explores the intersection of technology and society, if the “what if phones but too much” line of criticism is reductive, if the idea of a Black Mirror “shared universe” is in any way appealing, and more. Plus, Paul meets The Greatest Showman, Arlo and Sarah marvel at The Shape of Water, and Arlo finally puts Paul in his mouth.

Next: famed Briton Wesley “Wezzo” Mead stops by once again to discuss Chris Carter’s seminal sci-fi series The X-Files. This time, the gang will discuss season 7.

Rising from the sea to do battle with Paul and AJ, the monstrous Greg Sahadachny realizes he can never win and instead decides to discuss Guillermo del Toro’s new film Pacific Rim. The trio talk about the ins and outs of del Toro’s robots vs. monsters epic, particularly its lack of humanity, emphasis on big action, and exactly how successful that combination is. Plus, How to Train Your Dragon 2 is on its way and Paul somehow liked Spring Breakers.

Next: Sir Eric of Sippleonia returns to chat about the 2011 film Detention, which he has been bugging the boys to watch FOREVER.

The latest in the trend of computer-animated talking animal movies was the first for the studio (Paramount) and the director (Gore Verbinski), and still manages to rank as perhaps the best of the genre. What on paper sounds like just another cliché-ridden cartoon for big kids turns out to be incredibly original, quirky, and thoughtful, with a wonderful voice cast (led by Johnny Depp as the titular pet chameleon lost in the “Wild West” of the Mojave desert), and what is conceivably the most stunning, eye-wateringly beautiful animated vistas and landscapes ever. Paying homage to everything from Fear and Loathing in Las Vegas to Chinatown, and featuring hands down the coolest freaking cameo you’re likely to see in a long, long time, Rango is a must-own. My highest recommendation! DVD and Blu-ray special features include an alternate ending, deleted scenes, a featurette on the film’s creatures, and commentary from the filmmakers. Blu-ray extras include the ability to watch the storyboards alongside the movie picture-in-picture, a behind-the-scenes featurette, an interactive trip to the town of Dirt, and more.

(Originally reviewed by both Paul and myself in “Secret Origins.”)

END_OF_DOCUMENT_TOKEN_TO_BE_REPLACED

Gobbledygeek episode 38, “Springtime for Puffy Val Kilmer,” is available for download right here. This is our new regular air date, Saturday, so mark yer calendars for future reference, Gobblers. In today’s episode, Paul and I look ahead to the spring movie season, discussing 31 films we find interesting in some capacity. Some we are legitimately anticipating, like The Adjustment Bureau and Super; some we’re merely curious about, like The Beaver or Your Highness; and others, well…we’ve got Justin Bieber: Never Say Never on there, so, yeah. Then, in another segment of “Reel Picks,” I proffer my opinions of The King’s Speech and Blue Valentine while Paul talks up the Criterion release of Guillermo del Toro’s Cronos.

Tune in next week for our Oscar predictions episode!