Even with a spoonful of sugar, Paul finds this week’s Geek Challenge hard to stomach. You see, he has invited Arlo to watch Robert Stevenson’s delightful 1964 classic Mary Poppins, in which a magical Julie Andrews and an accented Dick Van Dyke dance their hearts out while unlocking the joy hidden within a stuffy banker. In return, Arlo has forced Paul to endure Agnieszka Smoczynska’s 2015 goth music video The Lure, in which there is little magic but plenty of pain, blood, and desperation as two virginal maneating mermaids come of age. They’re both musicals, they’re both about women, and…that’s about where the similarities end. Some men just like to watch the world burn, and Arlo appears to be one of them. Plus, lots of great trailers; Sense8, Legion, and Westworld broaden sci-fi TV’s horizons; Brian Michael Bendis’ time with Spider-Man comes to an end; and Arlo finally watched Guillermo del Toro’s debut feature Cronos.

Next: after 14 years, The Incredibles 2.

Shh. Keep it down or you’ll miss the latest episode of Gobbledygeek, wherein Paul and Arlo are joined by their pal Nate Curtiss for a discussion of John Krasinski’s horror-thriller A Quiet Place. The nearly wordless film, which makes extensive use of subtitled American Sign Language, presents a unique theatergoing experience; every gulp of soda and crunch of popcorn reverberates throughout the auditorium. The gang talks about their different theater experiences, and how the film reveals the true heart of an audience; why it’s important Krasinski cast deaf actress Millicent Simmonds; how Krasinski’s lack of horror experience proves to be a strength; and more. Plus, Paul digs on TV sci-fi: Final Space, Lost in Space, The Expanse, and Legion.

Next: this year’s superheroic Four-Color Flashback continues with a discussion of the original, non-Nazi-fied Captain America and the Falcon: Secret Empire. Wanna Cook? co-author (and Cap superfan) Ensley F. Guffey drops by. 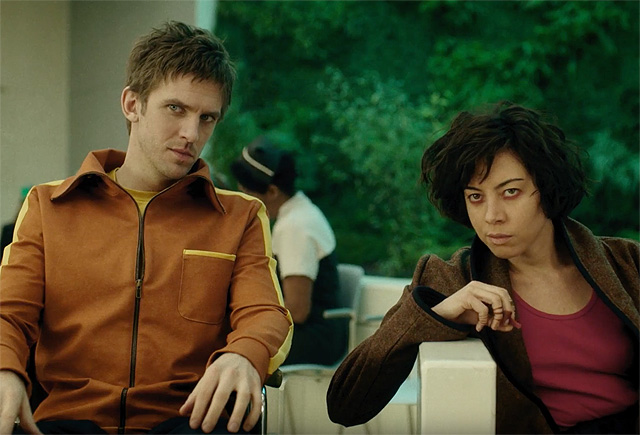 Gobbledygeek episode 306, “Unmaking Soup,” is available for listening or download right here and on iTunes here.

This week, Paul and Arlo turn on and tune into the wonders and terrors of the superhuman mind by taking a gander at the first season of Legion. The FX series, developed by Fargo‘s Noah Hawley and theoretically set in the X-Men universe, is unlike most other superheroic media. David Haller is either schizophrenic, an extremely powerful telepathic/telekinetic mutant, or both. Witnessed through his eyes, the world is fractured, bizarre, disturbing, and a tad surreal. As such, the typical X-Men plot–David is rescued from a mutant-hunting government organization known as D3 by a group of rebels with a Magneto-esque leader–is given a swift kick in the pants. The boys discuss this inventive telling of a simple story, the show’s many visual flourishes, why it’s a powerful exploration of mental health, and Aubrey Plaza’s revelatory turn as a 50-year-old man. Plus, a surprise Rick and Morty pre-empts Samurai Jack, overjoying one of our hosts and causing considerable frustration in the other; and the boys rave about the fifth season of another brilliant FX drama, The Americans.

Next: film critic and horror expert Jess Byard joins Paul and Arlo to ask, “Where has all the good sci-fi horror gone?”