Superhero origin stories are de rigueur, as are attempts to translate those stories to the “real world.” Chronicle, from newcomers Josh Trank (director) and Max “son of John” Landis (screenplay) pulls it off surprisingly well, featuring three teenage protagonists that behave in completely believable ways when gifted with burgeoning telekinetic powers. The first half of the film is a fun, wild ride as the kids play around with levitating Legos and blowing up cheerleaders skirts. The second half gets more serious as one of them succumbs to the urge to strike back at a world that has admittedly been smacking him in the face for some time. By the time the kids master flight, forcefields, and bus-tossing, we’ve arrived at the predictable but very well played showdown of “good vs. evil.” It’s been said that heroes are defined by their villains, and trite but true it’s never more apparent than the schism between abused and angry Andrew and idle and indolent Matt. Without the need to protect innocent bystanders threatened by Andrew going all Tetsuo on downtown Seattle, it’s entirely possible Matt would have never moved past the pranking phase of superherodom. In fact I could imagine a world where he grew bored by it and actually never even used it again. But “Tetsuo” did happen, and Matt stepped up to the “Kaneda” plate…

END_OF_DOCUMENT_TOKEN_TO_BE_REPLACED

Well, that settles it. Kenneth Branagh is a geek. How else to explain the brilliant blending of Shakespearean pomp and circumstance with the Lee/Kirby pseudo-sci-fi goofiness? Thor the comic was always just a tad inconsistent in the way it imported ancient Nordic mythology into the modern superhero landscape. The two writers that, in my opinion, handled the sacred and the profane best, Walt Simonson and J. Michael Straczynski (the latter one of the five credited screenwriters), each found a way to strike a comfortable balance. Thor the film favors the sci-fi over the fantasy, no question. But Branagh manages to create a cosmology here that is both theologically intriguing and satisfyingly silly.

So what is all this about, anyway? Well it’s that old familiar tale of the beautiful astrophysicist that discovers a fallen Norse god in the New Mexico desert, teaches him how to eat Pop-Tarts and wear low cut jeans, and ultimately helps him learn humility by being sweet and pretty and trusting of him, which of course allows him to regain his divine power just in time to destroy the god-killing robot set upon him, return to his heavenly realm and defeat his traitorous brother before he can steal the throne from their father. So, basically it’s nothing we haven’t all seen before.

END_OF_DOCUMENT_TOKEN_TO_BE_REPLACED

Army Captain Colter Stevens (Jake Gyllenhaal) has had his consciousness plugged into the memory remains of a man who died in a train bombing this morning. He has eight minutes to scour the dead man’s final thoughts for clues to who planted the bomb in order to prevent an even larger bomb being detonated later. The problem is the experience of being inserted into this “source code” simulation is disorienting, and it takes several attempts, each one ultimately ending in Colter “dying” himself in the explosion, for the Captain to find his footing and start his investigation effectively.

So the old-fashioned sci-fi obviously comes from the fantastical technology that allows a man to be transported into the memories of a dead man, and to move about freely within that memory world. The ticking clock aspect of the story, equally obviously, comes from the eight minute window in which to search for a mad bomber. Though the train Colter is riding on is only a flashback of a train, and it has already been destroyed, the knowledge that back in the real world the bomber remains at large and is planning to detonate a much larger bomb in the middle of Chicago keeps ratcheting up the tension with every failed attempt.

As for the theophilosophical element…?

END_OF_DOCUMENT_TOKEN_TO_BE_REPLACED

Okay, let’s get this out of the way right up front: Sucker Punch is not a perfect film. God knows there are enough righteous film critics and internet ass hats falling all over themselves to be the one to find the snarkiest, most condescending way to tell you as much. To listen to the vocal majority you’d think this film is the final herald of the Apocalypse. Yes, there are flaws, I’m not gonna lie. But despite the uneven script and occasionally insipid dialogue, I pretty much LOVE this movie. And I’m gonna tell you why.

END_OF_DOCUMENT_TOKEN_TO_BE_REPLACED 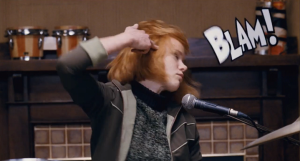 I really just wanted an excuse to post the above picture.

But while I’m at it, HAVE YOU SEEN THIS SCOTT PILGRIM TRAILER?! If not, take two minutes and thirty-three seconds of your pathetic life to watch it right now:

END_OF_DOCUMENT_TOKEN_TO_BE_REPLACED

I attended a packed midnight screening of Iron Man 2, and directly beforehand, in the same auditorium, a considerably less packed screening of the original Iron Man. The first is every bit as great as it was two years ago; it is charming, rich with character, brilliantly acted and directed, and with not a wasted minute. It’s the perfect blend of comedy, drama, and action, a genuine crowdpleaser in every sense.

END_OF_DOCUMENT_TOKEN_TO_BE_REPLACED

Sonny (the voice of Alan Tudyk) in I, Robot

Welcome to the first of what may or may not end up being a semi-regular feature here, Off Kilter. This is where I plan to talk about those films, television, music, books, comics or whatever that seem to be generally unpopular but which I happen to enjoy anyways. While wearing a kilt. Which is not really important…unless you happen to be the one wearing the kilt, in which case it’s really the only thing that matters.

END_OF_DOCUMENT_TOKEN_TO_BE_REPLACED

Kick-Ass is not particularly well-made. It is not particularly well-written. With some exceptions, it is not even particularly well-acted. It is absolute trash, and yet that is part of its appeal. The Mark Millar/John Romita Jr. comic book upon which it is based was slick and stylish, and felt very much in the tradition of ultra-violent superhero satire. Matthew Vaughn’s film, on the other hand, is scrappy and unpolished, getting by solely on its foul-mouthed, blood-spattered charm, much of it due to a pint-sized, purple-clad powerhouse.

END_OF_DOCUMENT_TOKEN_TO_BE_REPLACED

I went into Peacock as I am rarely able to go into a new movie: Totally blind. Usually when a film stars Cillian Murphy, Ellen Page, and Susan Sarandon, I’ll have heard about it. Not so with Peacock. I hadn’t seen the trailer, hadn’t read a review, hadn’t heard a plot summary, hadn’t even heard the title. I knew nothing of its existence. It’s like it appeared out of thin air. Was I making a discovery? Was this some great, underground movie that I’d be able to champion long before it was set loose on the mainstream?